The Toolkit for Kingdom City/Town Collaboration in a South African context was developed by the South African Christian Directory Team with the aim to provide a set of concepts, processes, principles, best practices, guidelines, and ideas, enabling effective collaboration in an urban context e. g. what will it take towards spiritual, human, social, economic, and environmental flourishing?

The Toolkit is based on a combination of experiences in South African cities and towns which were captured and integrated into the Toolkit, as well as international stories of city movements such as Movement Day and the Lausanne City Collaboration for Kingdom Transformation.

It should be noted that:

Collaboration is the action of working with someone to produce something. Key concepts are cooperation, coaction, working jointly together with another and others, joint action, synergy, teamwork, partnership, networking, association, alliance forming, and concerted effort. Collaboration is the key to reducing duplication of our efforts, breaking out of our own “silos”, crossing the divides, maximising impact, and strengthening the credibility of our witness in Christ. It is the opposite of being independent, doing your own thing, making your own effort, division, lack of unity, operating in “silos”, etc. It should be noted that the concepts of transformation, movement or city gospel movement is not used.

Kingdom refers to the Kingdom of God, which is the central focus of the teaching and ministry of Jesus Christ. It will necessarily include the expansion and strengthening of the Christian Church as well as impacting society with Kingdom or Biblical values.

For the purposes of this report the term ‘Toolkit’ refers to a set of building blocks designed to be used together or for a particular purpose. A Toolkit is different than a road map or milestones as there is not a correct sequence of activities and there is an interrelationship between the different components of any urban area and such an urban area can be seen as an ecosystem.

Movement Day has identified four building blocks for successful City Gospel Movements namely Prayer, Research, Leadership and Outcomes: https://www.movementday.com/building-blocks/. We have compiled the following seven building blocks, as indicated in the Diagram, not necessarily in any preferred sequence. Click on the building blocks in the diagram below, which will take you to the context of each of the building blocks as well as to Case Studies and References. 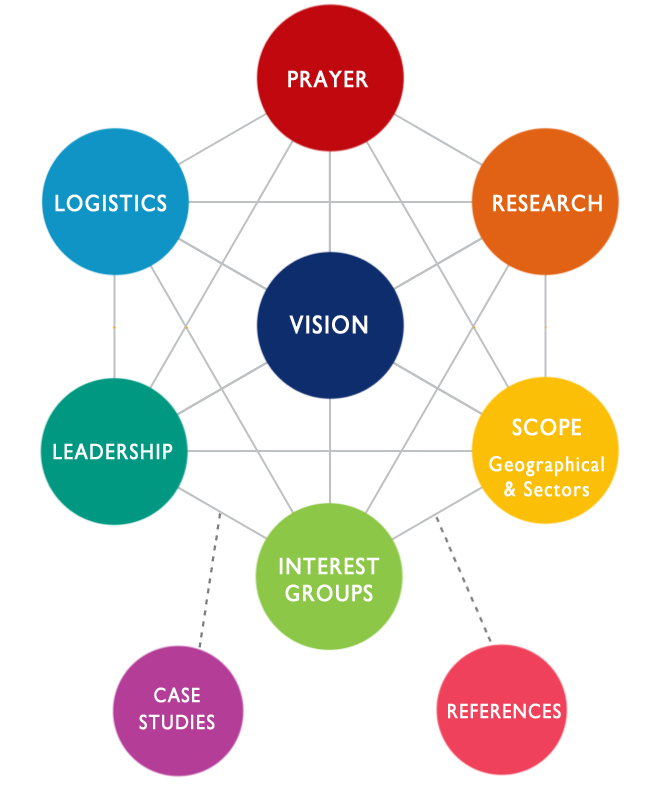 The following should be taken note of: